FL1 Standard – these specifications can be found on the packaging of most flashlights today. What do these specifications mean for you, and how can you interpret this information? Since we started including runtime graphs in our reviews, we’ve gotten a lot of questions about the ANSI FL1 Standard, so this article is intended to give you a better understanding of the technical aspects of flashlight performance.

Commonly abbreviated as the ANSI FL1 Standard, the ANSI/NEMA FL 1-2009 Standard is a set of flashlight performance guidelines. Before the introduction of these standards, you may have seen variety of phrases on flashlight packaging, such as these:

With the FL1 Standard, ambiguous marketing phrases are a thing of the past, and direct comparisons can be made between flashlights from different manufacturers. Adherence to the FL1 Standard is voluntary, although the vast majority of manufacturers have adopted the standard. Here’s how the ratings are defined:

Beam Distance [Meter]
Beam distance is defined as the distance from the flashlight where illuminance is equivalent to a full moon on a clear night.

Runtime [Hours]
Runtime is defined as the amount of time, rounded to the nearest quarter hour, until output drops below 10%.

Impact Resistance [Meter]
Impact resistance is tested with drops onto a concrete surface at the specified height with all intended accessories, including batteries, installed.

Now that we have defined these ratings, let’s see what the not-so-obvious ratings mean.

Light Output vs. Peak Beam Intensity
Although higher output seems like it should correspond to higher intensity, a light with more lumens is not necessarily “brighter.” Here’s why:

So, which is more important? Light output can be thought of as “raw material,” but it’s how that light is dispersed that determines usefulness. For example, a fluorescent lamp has high output but low intensity (a dispersed, or flood, beam), whereas a laser and has low output but high intensity (a focused, or spot, beam).

Both are useful for their intended purposes, but neither would make a good flashlight. Thus, the candela per lumen (cd/lm) ratio can be used to determine if a flashlight has a spot- or flood-type beam.

As a reference, well-focused spot beams can be over 100 cd/lm, tactical flashlights are typically between 20-100 cd/lm, and work lights are less than 10 cd/lm.

Brightness, as we think of it in everyday terms, is actually a difficult measurement to grasp numerically. While 10,000cd will appear brighter than 5,000cd, it will not appear twice as bright. The reason is because our perception of brightness is non-linear, meaning that “twice the intensity” will not appear “twice as bright.”

Keeping this non-linear relationship in mind is important for making Peak Beam Intensity comparisons, and a rough estimate is that for a light to appear twice as bright to the eye, four times the intensity is required.

Beam Distance
Beam distance is calculated from peak beam intensity, so there is actually no new information here. In addition, a full moon on a clear night is not really a useful amount of light, so don’t put too much weight on this specification.

Limitations of the FL1 Standard

Runtime
Here’s a trick question: when is a 1.5V battery actually 1.5 volts? Ideally, always, but an alkaline battery’s voltage decreases as it discharges, so it would almost never be 1.5 volts. This is why LED flashlights require complex electronics, but not all flashlights behave the same way. To capture this behavior, runtime must be presented as a graph, which is not required by the FL1 Standard. Take this sample data from our runtime tests: 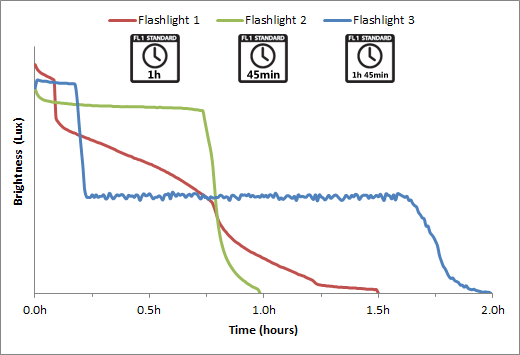 This runtime chart tells us the following information:

Based on the runtime graph, we can say that flashlight 2 is a better choice than flashlight 1, and flashlight 3 is the good choice for extended runtime (in fact, flashlight 1 and 2 are actually the same flashlight using different batteries, but that’s the topic for another article).

These observations would not be possible with just a runtime rating, which is why conduct our own independent ANSI FL1-compliant testing and include runtime graphs in our reviews to supplement the FL1 Standard Runtime. For more information about our runtime tests, please click here.

Impact Resistance
While LEDs are reliable solid-state devices with no moving parts, electronic circuitry that regulates power to the LED tend not to be as durable. Occasional drops shouldn’t be an issue, but repeated stress can cause damage that may lead to erratic operation or failure. Our advice would be to treat LED flashlights like any other electronic device and avoid drops or other damage if possible.