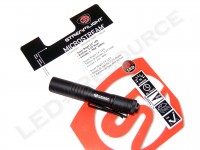 Simple and compact, the Streamlight MicroStream is one of the smallest LED flashlights using common batteries. This latest 2011 version of the MicroStream features a high-performance Cree LED, as well as several improvements over the previous generation such as a new two-way pocket clip. Powered by a single AAA battery, the MicroStream weighs just over one ounce and is capable of putting out 28 lumens for over two hours.

MSRP for the Streamlight MicroStream is $28, and the light is only available in black. 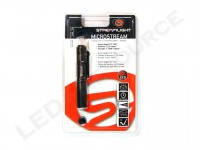 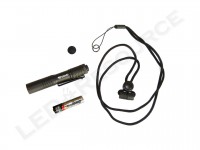 The MicroStream uses one AAA battery. 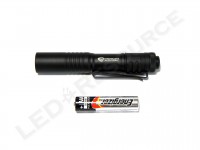 When changing batteries, care must be taken because the pocket clip is attached to, and turns with, the tail cap. 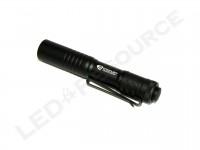 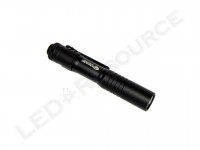 Head
The head, which cannot be removed from the body, features a polycarbonate window and a smooth reflector. 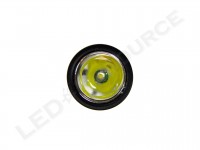 Body
The light is type-II anodized aluminum inside and out. Grip is provided by the pocket clip, which also prevents the light from rolling. 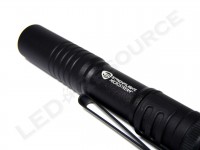 Tail Cap
On the tail cap is a removable two-way pocket clip and a forward clicky switch covered with black rubber. 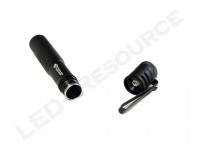 Due to customer issues with the switch cover wearing out, Streamlight has made the switch cover thicker and also user-replaceable (spare cover is included). Clicking the switch takes more force than the older, non-C4 version MicroStream.

The MicroStream is rated for 28 lumens, and uses the Cree XP-C LED. As expected for a light with this LED, the hotspot isn’t tightly focused or well defined like a tactical light, but overall the beam is smooth and clean. 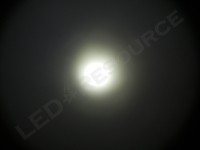 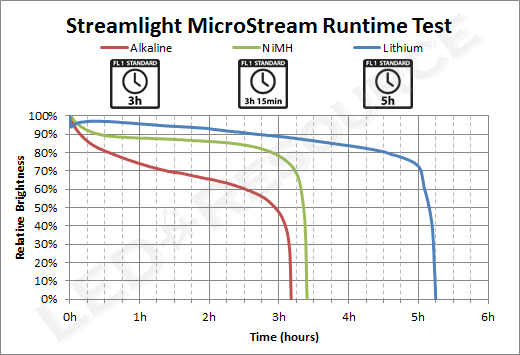 The ANSI FL-1 standardized output and runtime specifications were made using alkaline batteries, which are included with the lights, and NiMH rechargeable and Energizer Lithium primary AA’s may also be used for increased brightness and more consistent output. The MicroStream has a long, useful runtime that, in our test, exceeded ANSI specifications by over an hour.

We’ve said this before, but we’ll say it again: the best flashlight is not going to be the brightest one you have at home, but the one that you carry everywhere with you. We’re not particularly fond of small twist-operated lights as they can be difficult to turn on, so the tail switch is a big plus for the MicroStream.

With the $20 price point and the holidays just around the corner, the Streamlight MicroStream will be a great gift for that outdoor enthusiast or gadget lover in your family! 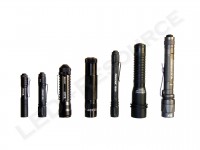