In this follow-up to our Maglite LED product line review, we will be featuring the recently released Maglite XL100 LED flashlight! This is arguably one of the most anticipated, as well as innovative flashlights released recently. The key highlight of this light is motion control variable power setting, which is the first of its kind and makes fumbling through different modes a thing of the past.

As this light was released only a couple days ago, availability is limited at the time of writing. MSRP for the light is $39.99, and several retailers have started shipping them out for around the $40 price point. 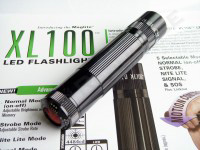 The light will be available in several colors, including black, grey, silver, blue, and red. 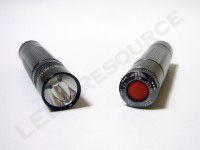 Included in the blister packaging are: Maglite XL100 LED 3AAA flashlight and 3 x AAA Duracell alkaline batteries. This is a departure from the typical packaging of Maglite’s AA and AAA offerings, which include a belt holster. 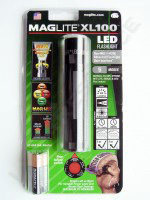 Many low-cost LED lights use the 3AAA form factor because the voltage from 3AAA batteries is capable of directly powering the LEDs, but this form factor usually requires a plastic caddy to hold the batteries and is generally considered undesirable in high performance lights. Constant pressure from the battery springs often strain the plastic to the point of breaking, and dislodged batteries after dropping the light is not unheard of. Of course, contrary to low-cost lights, the XL100 is regulated to provide consistent output until the batteries are completely depleted. Seeing that Maglite is known for quality and reliability, I was particularly interested in what kind of battery carrier Maglite would use. 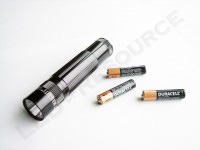 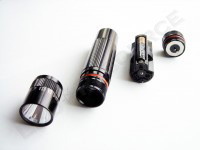 Needless to say, I was pleasantly surprised to find a sturdy, single-piece, battery holder. The ends are clearly marked to show which side of the battery goes where, and the carrier is marked with an arrow on the side, showing which end goes in the light first. 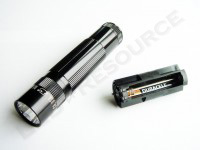 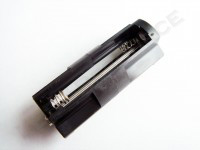 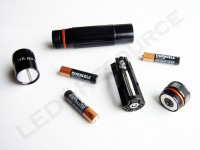 The head features a plastic window and a deep smooth reflector. The beam can be focused with a quick turn of the head, or the head removed to flood an entire area with light. The face cap is engraved with MAG-LITE® LED XL100™ – ONTARIO, CA, USA and Maglite’s logo in bold lettering. 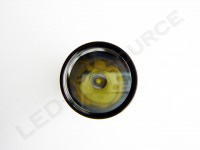 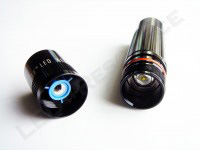 A glass window may be installed using Mag Instrument part #108-617, the same as the 2AA, but removing the process to remove the reflector (pushing it left and right while applying pressure on the window) has the potential to damage the reflector during removal, so if one wishes to change the window, proceed with caution! 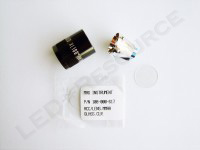 The entire light is type-II anodized aluminum inside and out. The anodizing helps prevent corrosion, and also electrically insulates the light. The knurling is different from Maglite’s other offerings, as they run lengthwise along the body of the light, instead of in a diagonal cross-hatch pattern. As always, the light is easy to grip and will not easily slide out of your grip. 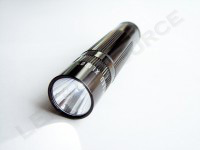 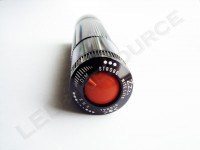 The XL100 is the first Maglite to feature a push-button tail cap switch, and this is no ordinary tail cap switch. This is where the magic happens! An accelerometer drives the interface, and the different modes are clearly marked. 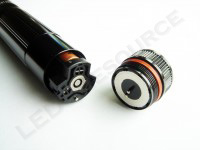 There is a notch on the switch cover that points to the DIM marking, which can be used as a guide to orient the light in darkness. 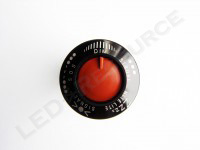 Some demand ease-of-use in a light, and others, functionality. It’s hard to achieve both, but the “Advanced Flashlight User Interface” in the XL100 comes very close. To be honest, I was a bit skeptical about the new motion control interface until I got a chance to try it out. It turns out that regardless of which way the light is oriented, a single short press on the button will turn the light on in regular mode.

If full brightness is all you need, you can safely ignore the markings on the tail cap and skip to the next section of this article. For those unfazed by advanced features, read on!

With the light horizontal and the DIM label at the top, press and hold the switch. Rotating the light left and right will adjust the brightness. Fumbling with the light is not needed to get it back to 100%, the light is forgiving of error around the 100% zone (DIM marking at the top). Once the desired brightness is achieved, releasing the switch will set the brightness. The light will remember the setting after switching off, and the memory function does not use power to retain the setting. The stored brightness setting also applies to the signal and SOS modes.

The strobe feature is designed for disorienting or getting somebody’s attention. With the STROBE marking at the top, pressing and hold the switch until the light starts strobing. If the button is not released, the light can be rotated left and right to adjust the strobe speed. The strobe can go as low as a slow flash of about once per second. Click the button to disengage.

Since the switch on the light is neither a forward nor a reverse clicky, there is no way to signal with the light. Instead, with SIGNAL at the top, press the switch until the light turns off. Release the switch, and twist the light to the left or right to turn on. Rotate the light back to the original position to turn off. Click the button again to turn the light off.

The simplest mode of them all, with SOS at the top, press and hold to engage SOS pattern flashing. Press the button again to disengage.

To disable the light, point the light upwards, press the switch, point the light downwards, and release. The light will not turn on if the switch is pressed. To unlock the light, repeat the procedure. This feature is handy for packing the light, as crude lockout features such as unscrewing tail caps or removing batteries would not needed.

This light is rated for 83 lumens and 134 meters of throw.* To compare, the 2AA Mini Maglite LED is 69 lumens with 101 meters of throw. Below is a comparison of the XL100 and the 2AA indoors from approximately five feet away. The XL100 has a larger hotspot and is a bit nicer than the 2AA. 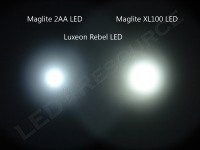 The output of the XL100 is a nice increase from the 2AA light, and it is definitely adequate for most tasks. 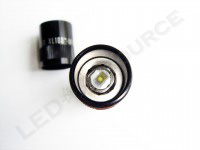 The XL100 is shorter than the 2AA, but is quite long for a 3AAA light. The size is perfect for one-handed use though, as it is long enough so that your fingers won’t block the front and the light is significant enough that it won’t be easily dropped. 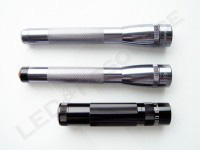 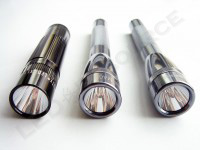 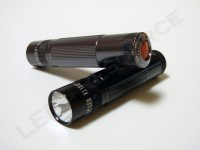 There is one main disadvantage of the electronic switch used to drive the XL100’s user interface, and it is the presence of a standby current drain. The XL100 has a measured standby drain of 32.7 µA (or 0.0327 mA). A typical quality alkaline AAA has a capacity of about 1000mAh, which means that a set of brand new alkaline batteries will be completely drained after three years.

However, light output will decrease with reduced battery voltage due to this drain, so the XL100 would not make a good choice as an emergency light, unless the batteries are stored seperately (which is recommended practice even for lights without a standby drain, because of the tendency for alkaline batteries to leak). 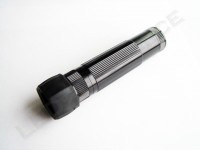 I have to say that compared to other flashlights, the XL100 stands out as a “smartlight!” While no light is free of drawbacks, the innovative user interface of this light certainly makes up for the few minor annoyances. The switch is simple enough for anyone to use, but can also be completely ignored if multi-mode is not your thing. This is an easily pocketable light and would make a great every-day carry (EDC) light for those that take pride in always being prepared! 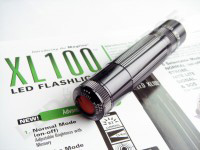 * During production of the XL100, Philips LumiLEDs silently revised the Luxeon Rebel LED, and the prototype XL100 used for ANSI testing featured the older emitter. The specifications on the packaging apply to older XL100’s, newer XL100’s have the same specifications as the XL50, which is 104 lumens, 145 meters of throw, and 5232 candela. The packaging may be updated in the future to reflect this new information. Our sample XL100 with serial number 169XX has identical output as the XL50, so we can say that if the serial number on your XL100 is greater than 17000, you have the new emitter.