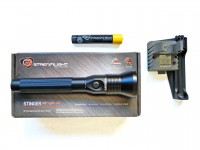 Depending on charger configuration, MSRP for the Stinger DS LED HP is around $224, and the light is only available in black. Various configurations can be found for around $140 at most retailers. The most complex part about this light is probably choosing the right charger configuration before placing your order! There are over thirty different variations, but once you have identified the options you want, a quick look at the Info Sheet for the corresponding item number will get you the package that you want. 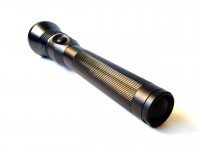 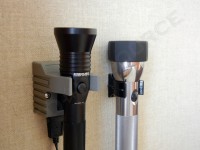 Charging speed is the first consideration to make. There are two choices: standard charge and fast charge. The standard charge is a slow 10 hour charge designed for overnight charging. Charging the battery slowly is optimal for battery longevity, but naturally, it takes longer. The fast charge is a much quicker 2.5 hour charge. However, this is still a fairly slow charge rate, so “fast charging” wouldn’t have much effect on battery longevity. For most uses, our recommendation would have to be the fast charger. 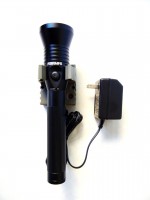 Next, both standard and fast chargers are offered with the option of PiggyBack charging. This feature means that the charger can also charge a spare battery. A PiggyBack charge package includes two batteries. Finally, it is time to pick the power source (or lack thereof, there is a package for just the light and battery for those that already have a charger). Chargers are offered with AC (120V or 240V), DC (12V), or both. 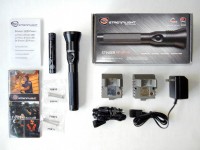 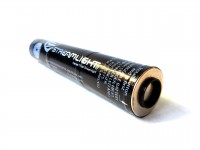 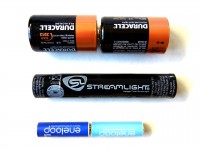 It’s rare to see NiCd batteries still in use today, as nickel-metal hydride (NiMH) or lithium-ion batteries are more commonly used. While NiCd is not as energy dense, they have lower self-discharge, and tolerate abuse (such as overdischarge) better. The battery pack can be recharged up to 1000 times. 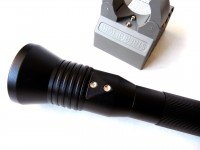 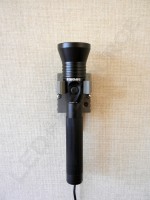 To charge the light, insert the barrel of the light into the charger, and pull down until it locks. Streamlight advises that the “memory effect” common to NiCd batteries is rare under normal flashlight use, so it isn’t recommended to condition the battery with frequent complete discharging.

Head
The head features a coated scratch-resistant polycarbonate plastic window and a smooth reflector. The scratch resistant coating is a proprietary silicon dioxide coating that is cured onto the plastic for a minimum pencil hardness of 3H (meaning that only a pencil with 3H hardness or higher will be able to scratch the window). 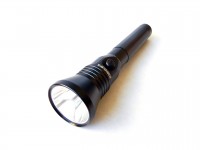 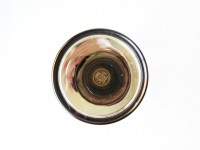 The window and reflector are attached to the head assembly, so the Stinger DS LED HP can be defocused by loosening the head. However, a “donut hole” quickly appears in the beam, reducing the usefulness of this feature. For temporary use, the head can be removed for a complete flood beam, but care must be taken to prevent dust from getting onto the LED or reflector, as they are exposed.

Body
The light is type-II anodized aluminum inside and out. Charging contacts are on the back of the light, on an elevated triangle that orients the light in the charging cradle. The body of the light is covered with rubber to help maintain a secure grip on the light. 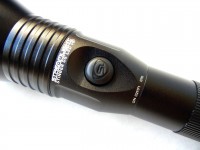 The head mounted switch is a momentary-capable electronic switch. As such, the switch does not have “on or off” like a mechanical switch, and this allows for switching modes, or using the other switch, at anytime. More on the user interface in the next section.

Tail Cap
On the tail cap is another electronic switch, which covered by black rubber with Streamlight’s logo on it. The button is recessed, allowing the light to tail-stand. 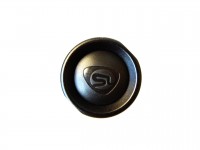 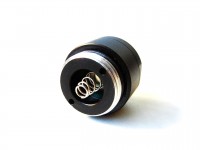 Both the head and tail switches are responsive with good travel, although I tend to prefer using the head switch since this is a larger-sized light.

All of the Stinger LED lights use the same four-mode user interface. The UI isn’t mentioned specifically anywhere, so I will go into a little more detail here.

Click and Hold: High-Medium-Low
When either button is pressed and held, the light will slowly cycle through the three brightness levels in high-medium-low-medium-high order. When the button is released, the light will stay in the current mode. The mode can be changed anytime, whether the light is on or off.

Two Fast Clicks: Strobe
With two fast clicks, the 200 lumen strobe is activated. Once again, strobe can be activated anytime, whether the light is on or off. To return the light to high, double-click the switch again (this would turn the light off then immediately turn it back on).

For all modes, a single click will turn the light off. Since the light uses electronic switches, there is a small standby current drain of 5 µA (0.005 mA), which is negligible.

The Stinger DS LED HP is rated for 200 lumens with its Cree XR-E LED. The large reflector in the HP model produces a clean, smooth beam designed for throw. A couple rings are visible around the hotspot due to the design of the LED, but these artifacts are fairly minor. 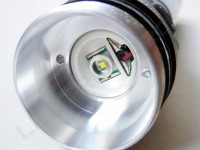 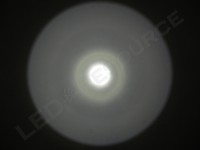 The light is rated for IPX4 water-resistance, which means it can withstand splashing water from all directions, so rainfall is nothing to be worried about. 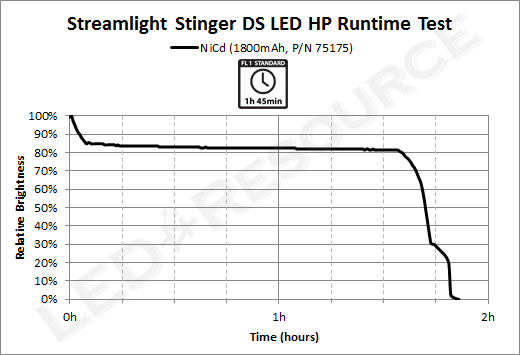 The ANSI FL-1 standardized output and runtime specifications of the Stinger DS LED HP were made using the standard NiCd battery pack. The discrepancy between the manufacturer specification and our runtime test can be attributed to the age of our NiCd battery. With a brand new battery, NiCd runtime will exceed 2h, but our runtime test was conducted six months after publishing this review.

Streamlight offers a variety of charging options and add-ons, such as traffic wands and holsters. For my review, a PiggyBack fast charger accessory was separately ordered (item # 75276), which includes a charger cradle and spare battery (no AC adapter is included with PiggyBack accessories). 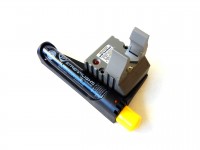 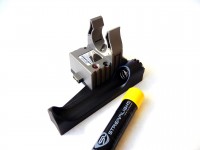 The PiggyBack charger charges both the light and a spare battery at the same time, and is available in a choice of standard or fast charging for the primary charger. The spare charger is steady charge for both models. 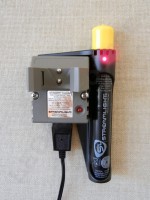 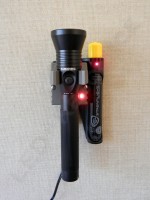 The Stinger DS LED HP rechargeable system is yet another refinement of Streamlight’s flagship Stinger line, and ordering the light can be customized with a choice of charging options and single (Stinger LED HP) or dual switch (Stinger DS LED HP). The HP model offers a large reflector for a more intense beam over the Stinger LED, yet is completely compatible with most previous Stinger line accessories. 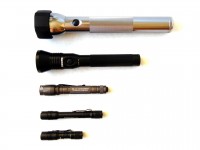 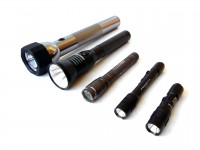