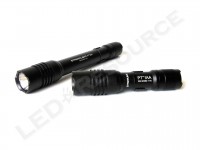 Professional Tactical, or ProTac, is a new line of flashlights from Streamlight featuring aluminum construction, small size and light weight, a choice of form factor, and multi-mode operation. Consisting of four lights, the ProTac Series offer a choice of using one or two AA, or lithium CR123A, batteries. For this review, we will be taking a closer look at the miniscule ProTac 1AA, along with the larger ProTac 2AA.

MSRP for the ProTac 1AA and 2AA is $68 and $70, respectively, and they are only available in black. 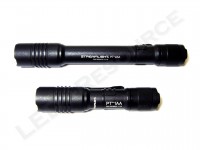 All four models of the ProTac Series can be found on for around $40 at most retailers. 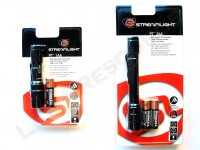 The ANSI FL-1 standardized output and runtime specifications of these lights were made using alkaline batteries, which are included, and NiMH rechargeable and Energizer Lithium primary AA’s may also be used for increased brightness and more consistent output.

Our runtime test for the high mode reported 1:40 from a set of LSD NiMH that had been stored for four months, and 2:00 from freshly-charged LSD NiMH. The ProTac Series lights automatically shut off when battery voltage drops below 1.0V per battery. The cut-off reduces runtime, but does protect NiMH batteries from deep discharges.

Head
The head features a tempered glass window and a smooth reflector, and cannot be removed from the body. 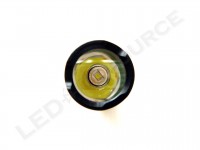 The bezel is crenelated, making it easy to see if the light is turned on, even when placed head-down. There are three flat spots on the sides of the head, which prevents the light from rolling away even if the pocket clip has been removed.

Body
The light is type-II anodized aluminum inside and out. A forward-facing removable pocket clip is attached to the body of the light near the tail cap, enabling bezel-down carry that protects the glass window. 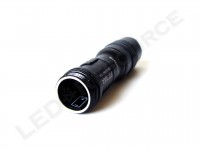 The pocket clip is fairly sturdy (almost too sturdy, especially on the 1AA because it rests on the bezel, but should loosen up after some use), and can be removed by just pulling it off.

Tail Cap
On the tail cap is a forward clicky-type switch covered by black rubber with Streamlight’s logo on it, which gives the button a nice texture. The tail cap also features crenellations, which prevent accidental button presses, but the light cannot stably tail-stand. The tailcap can be unscrewed a quarter-turn to disable the light from turning on. 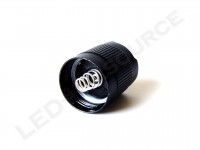 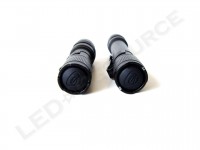 One minor problem here is that the end of the tail cap spring is exposed, which would scratch the batteries and make some noise when twisting the tail cap. Luckily, this can be quickly fixed by tucking the end of the spring below the last coil (a five-minute fix that only requires needle-nose pliers). The last coil of the spring should also be crimped, to prevent the end from popping back out. The picture above was taken after the fix.

All four ProTac Series lights feature the same three-mode user interface, which is operated by clicking the switch on and off.

2 Clicks: Strobe
With two clicks, the 100% strobe mode is activated.

3 Clicks: Low
With three clicks, the 12% low mode is activated. The light will briefly strobe before low can be activated, which could be irritating.

The light gives you 0.4 seconds to switch to strobe, and 0.8 seconds to switch to low. This isn’t a generous amount of time, but I didn’t have any trouble switching modes within the time limit. The short time limit helps prevent accidental activation of the strobe, which hasn’t happened with regular use of either light. 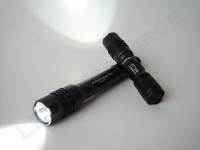 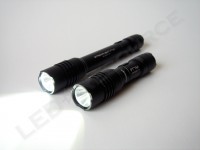 If you tend to use a low-output mode frequently, the time limit and sequence could be problematic. However, for those that use high-output most of the time, the other two modes are well-hidden unless needed. 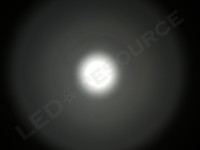 The 2AA is slightly brighter than several other 2AA lights, but with shorter battery life. The 1AA is almost as bright the 2AA, especially when using a lithium primary, due to the fact that lumens and perceived brightness isn’t linear (a rough example is that 4X more lumens will appear 2X brighter). Given the small size and convenience of only using one cell, the 1AA will be more than adequate for lighting up a dark sidewalk at night or peering behind a desk. 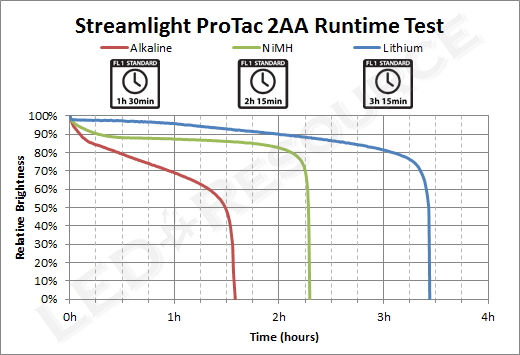 The holster that comes with these lights is a good “getting started” type of accessory. The Velcro belt loop accepts belts up to 2.5” wide, and the flap is also secured with Velcro. Unlike the 1AA’s holster, the 2AA’s uses elastic on the sides, which can catch on the bezel when the light is removed. 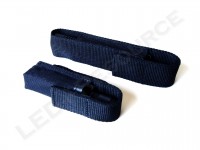 Construction of the holsters is a somewhat flimsy, and some precision is required when inserting the light because the holster doesn’t hold its shape. They are adequate for casual or recreational use, but for more heavy-duty use, investing in a better holster would be a good idea.

Our recommendation here would have to be for the ProTac 1AA. The ProTac 1AA is a small and bright single-AA light, backed by a lifetime warranty. As the ProTac 1AA and 2AA are around the same price, the 2AA would also be a solid choice for a higher-output light that is one of the smallest in its class. 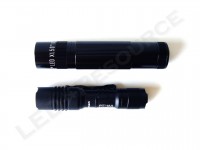 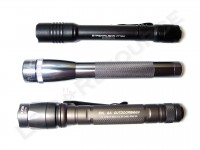