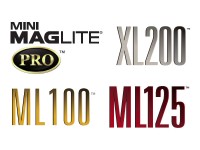 During SHOT Show 2011, Mag Instrument demonstrated several new models that will be released this year. The first of these new lights is the XL200, a brighter version of the XL100 with a revised user interface. Next up is the all-new ML-series that operates on C-cell batteries, which includes both the alkaline ML100 series, as well as the ML125 rechargeable system. Finally, the latest member of the Mini Maglite family is the Mini Maglite Pro, featuring a new LED for even more output.

Update 5/30/2012: Since several products have been delayed until 2012, information has been moved to the Upcoming LED Products page. As such, this page will only contain information about products that were released in 2011. 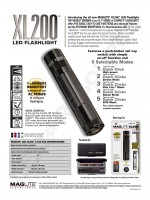 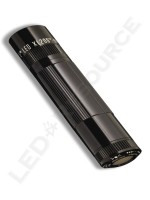 A new high-performance Cree LED is introduced in the XL200, which combines the features of the XL100 with the ease of use of the XL50. Instead of orienting the light a certain direction, which can be difficult to do in the dark, modes on the XL200 are selected based on number of clicks. The most commonly used modes are at the beginning of the sequence, and brightness and strobe adjustment, as well as the unique Nite Lite and lockout modes, remain accelerometer-controlled. 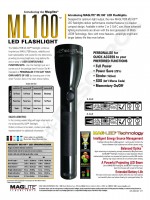 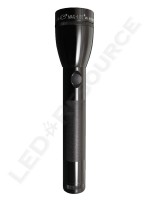 Four user-selectable function sets characterizes the new ML-series. The ML100 runs on 2 or 3 C-cell batteries, and the function sets consist of a choice of high, low, strobe, SOS, and momentary activation. The 2-cell version is the high performance model, but the 3-cell version features an extended runtime of up to four days. Both lights feature a Luxeon Rebel LED and redesigned reflector.

Update 5/13/2011: Following in step with the other 2011 lights, ML100 will also feature a new Cree LED (likely XP-E). As such, the specifications listed here will be revised and the new ML100 is undergoing ANSI testing, and we will post new information once available. 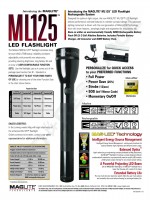 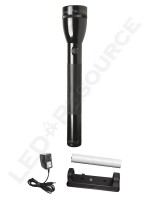 Featuring the new Cree LED as well, the ML125 is more than just a 3-cell ML100 with a rechargeable battery. The ML125 produces approximately 190 lumens on either alkaline or rechargeable batteries, and features the same four user-selectable function sets as the ML100.